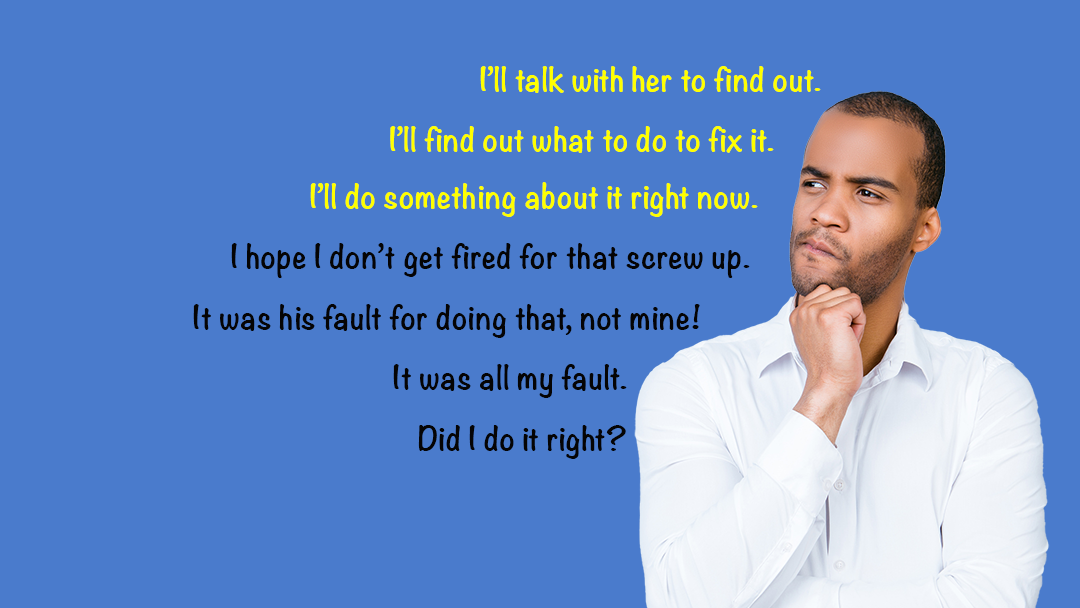 The foundation of effective leadership is self-mastery. When followers aren’t following and results are hard to come by, the first place a leader needs to look is at themselves. When life isn’t working for you, when you aren’t getting the results you want, when your followers are stumbling around as you are; what to do? These situations happen to us all. At these times, we need the power of conscious choice.

We make many choices every day. We don’t notice most of them. These are unconscious choices that have become pre-made, automatic habits. We go through our automatic routines: we wash up, have breakfast, check the phone, drive to wherever we are going, and interact with those around us. On most days, we give those actions barely a moment’s thought. It’s all automatic and works well…unless it doesn’t. Even then, still on automatic, we blame, complain, make excuses, and worry. We feel sorry for ourselves. We’re damned if we do and damned if we don’t. Such a waste of perfectly good energy.

These are the times to remind ourselves (or be reminded) of the power of conscious choice. A choice made consciously relaxes us relative to the anxiety that can accompany choice-making. It frees us from the stress of indecision. We provide ourselves with learning opportunities regardless of how they turn out. We motivate ourselves when our choices are deliberate and intentional choices. We strengthen ourselves; we are no longer victims when we are at choice. Conscious choice is the exercise of self-mastery. Whatever circumstances are foisted upon us, conscious choice expresses our power and influence in the world. That feels good.

In this series of five articles we will look at ways to regain the power of conscious choice when we’ve lost it and need it most. They will include an in depth look at…

Understanding the four points of choice provides a base for self-mastery. Conscious command of these choice points gives us mastery of ourselves. When the impact of our automatic behaviors falls away from our desires, we need a trip down the ladder of choice. A Deepak Chopra article speaks similarly when he writes about Awareness, Choice, Action, and Manifestation.

The four points of the ladder of conscious choice are…

The case of Lieutenant Colonel Samuel L. Lee will be our vehicle to explore these choice points. Sam was conscientious, smart, and hard-working. He was also stressed and close to burn-out. That’s when his boss asked me to work with him. Sam was a micromanager and a worrier. He checked into the work of his subordinates constantly. His people asked him to back-off. He’d agree but nothing would change. His boss would suggest the same, he’d promise, and nothing would change. He had stopped smoking. He had changed is eating habits (no more ice cream every evening). He had learned to delegate. He accomplished all three through consciously choosing the new behaviors. As adults we’re supposed to be able to do that. Changing his micromanaging at the level of behavior was not working for Sam. He had not mastered himself: the foundation of effective leadership.

Emotions drive our behavior. When we are unable to change our behavior, we need to look to our emotions. Etymologically, “emotion” means to move out. We do not move out, we do not act, we do nothing without caring enough to do so. Sam became anxious whenever he delegated a task to someone. On automatic, micromanaging was Sam’s way to ease that anxiety. If he could shift to a more upbeat emotion, backing off his people would be easy. However, changing emotions is easier said than done. We rarely understand how to move from one emotion to another. Colonel Lee had no clue.

Our emotions follow our thoughts. Change the thought; change the emotion. Whenever Sam delegated something, his thoughts went to: “Will they get it done on time?” “Will they do it correctly?” “Maybe, I should do it myself?” These thoughts produced Sam’s anxiety. If he chose different thoughts, a different emotion would result, which would drive behavior different from micromanaging.

Sam, however, admitted that changing those thoughts was not all that easy given the difficult experience he’d had as a young captain. (He had been point-person for an important project. A corporal under his command let him down. The project was late getting done which earned him a humiliating dressing down from his colonel.) We’re down to our final and most powerful choice point—our belief systems. What were the beliefs that drove his thoughts, that drove his emotions, that drove his behavior? Sam identified two:

Ironically, the first belief reinforced his micromanaging. He often identified problems as he checked his people’s work early and often. Problems they would likely have caught and corrected given the chance. In addition, the stress induced by his behavior did not have a positive impact on their performance. He had created a self-fulfilling prophecy—his people cannot be trusted.

His second belief added more pressure. Sam had been in the Army for 26 years. Both parents were retired Army. The Army was his identity and his life. Just the idea of not making full colonel was humiliating.

At this point on the ladder, Sam’s task was to see if his beliefs reflect current reality. After some thought he professed he had no idea how accurate his beliefs were. He checked with his military “god father” about how much that old incident should concern him. The general told him that such things happen to all young captains and is part of the learning experience for becoming a good leader. So, no, his concerns were understandable but baseless.

Were the members of his team really untrustworthy? He had never given himself a chance to find out. He came clean with his team about what was behind his micromanaging. From there, they made a deal that they would come to him with updates at critical points they would jointly identify at the beginning of each project. They agreed that if Sam slipped up (old habits are hard to break) they would let him know that a critical point was not at hand and to go away. This agreement contained not only good management practice but also gave Sam the support he needed to follow through.

With his fear and concerns allayed, Sam could delegate with a sense of relief. There would be an occasional backslide, but that’s to be expected. He called me last week to tell me he’s on the list for colonel. Yay!

In summary, the foundation of effective leadership is the ability to make conscious choices:

Choices that allow us to master our emotions that drive our behavior. What we don’t care about, we don’t do. The caring might take the form of joy, anger, fear, or love. They are all emotions without which we do much of nothing.

Choices that allow us to master the thoughts that drive our emotions. These thoughts include our interpretations and assumptions about what’s going on around us. When those thoughts are of threat and danger; anxiety, fear, and anger are likely to be provoked.

Choices that allows us to master the beliefs that shape our thoughts. If our beliefs do not reflect current reality, our emotions and subsequent behavior are likely to be incongruent and problematic. Our beliefs combine (1) what we’ve learned from experience, (2) what our caretakers, teachers, friends, and society taught us, and (3) whatever we invent as truth. When our beliefs are out of sync with reality, we may find ourselves in trouble with those around us. Fortunately, most of our beliefs are at least functional.

Life offers us whatever it does. When its offerings seem problematic, we can now move down each step of the ladder of choice until we find ourselves at conscious again. From there we will find ways to again move productively and satisfyingly toward our goals. Such is the foundation of leadership

Our next Leadership Lessons Learned will be about energy sponges— those things we automatically do that soak up our time and energy without producing much if anything that is useful. Examples include worrying, complaining, blaming, arguing, and perseverating. We will also explore how to stop the waste to use the time and energy for better things.